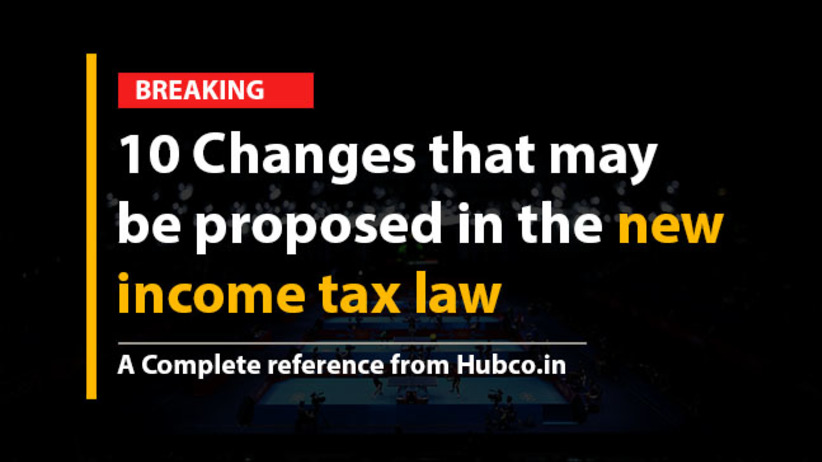 People who are still in shock with the demonitization and the GST implementation, we have another shock for you as the government is now planning to change the fifty years old income tax act, 1961 with a completely new income tax law and for that the government has already set up a task force to draft the new law which shall submit the draft to the finance ministry within 6 months.

Let us see the 10 changes that may be proposed in the new direct tax laws:

1. From five heads to two broad heads of income

3. Concept of Previous year and Assessment year may go

Currently, the income tax is governed with the two terms namely, previous year or assessment year. However, it may become too complex sometimes, and hence the government may done away with these two term and only the new concept of financial year might prevail.

4. Rich may be taxed more

Apart from the education cess or surcharge, the tax rate on rich may be increased further, to target the gap between the rich and the poor and hence, we might expect more tax on rich than poor.

5. Capital Receipts may be taxed

Under Income tax act, 1961, the capital receipt other than covered under capital gain chapter goes untaxed and hence, government may include the special provisions under new income tax law to tax the income.

6. Less exemption under IT act

Currently, there are lot of exemptions under income tax act, 1961 and hence to increase the tax base, the government will consolidate the exemption and may withdraw those exemption which are not essential in line with GST.

The government may also work on to abolish all the provisions under income tax act which are related to the tax holidays.

To attract more foreign investment and to provide a simple and stable environment for the Nonresident to invest in India, the government will amend and involve all new and simple laws to remove all ambiguity in the tax provision.

9. GAAR to be reintroduced

Though, the GAAR has been including in the Income tax act, 1961, but the same is still not functional at all. Hence, it is expected that government might reintroduced the concept of GAAR in the Indian laws to punish the impermissible tax arrangements.

There are currently many sections under income tax act due to which double taxation is effected and hence, the government might want to plug this problem.

We have just point out recent changes that might be included in the new direct tax and we hope that the good wisdom prevails over the country and the new income tax law brings more prosperity to the nation.

4 Reasons why you must apply for Service tax right now