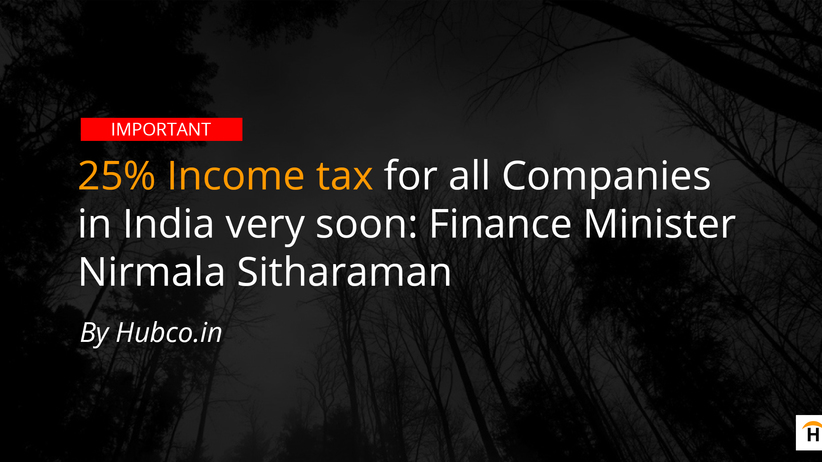 Good News! The Modi government has promised that they will reduce the existing income tax from 30% to a new reduced rate of 25% soon for all companies. The finance minister Nirmala Sitaraman in her discussion on the finance bill, 2019 defends the various tax-related moves made by the Modi government.

What did Finance Minister say exactly?

In four hours-long debate, she said that we have brought the [corporate tax] down to 25% which in order that now 99.3 percent industries are all covered by it and, therefore, hardly any is left behind. She further added that we shall cover the remaining soon.

Further, she said, “reduction in corporate tax rate is done with an intention, a trajectory was given to us as to how we will bring the corporate tax from the high rate that it was, from 30 percent down to 25 percent. It was a commitment given in the first-ever Budget in 2014. I had to honour it.”

25% tax rate for all Companies?

If the government implements its decision for 25% uniform tax rate, then it shall help India become more investment lucrative for all the long term foreign investors. This will, of course, result in more employment opportunities for our large young population.

What is the existing 25% income tax provision?

As per the finance bill 2019, companies up to the turnover of 400 crores shall be eligible for the reduce tax rate of 25%. Earlier, this tax rate was applicable only for the companies whose turnover does not exceed 250 crores.

The finance minister also responded to various other tax issues. She also justified the decision to levy 2% TDS on cash withdrawal exceeding one crore. The finance minister said that the levy of 2% TDS is a being done to bring greater transparency and accountability.

She said that the government has observed several cases where people are dealing with and transacting huge sums of money in cash from their accounts. Further, when those people are inspected, it was seen that those people have not even filed their income tax return.

So, for now, the lower income tax rate of 25% is applicable for only companies up to the turnover of 400 crores, but it is expected that the uniform tax rate of 25% shall be implemented very soon, might be in the next budget.